The screening is free, but booking is required

A Caught in the Act Production for Channel Four Television

Bright Eyes takes up the topic of AIDS but differs from previous coverage by examining the disease’s social and historical context. … Taking a newspaper article from the summer of 1983 as its starting point, Bright Eyes examines the way in which homosexuality has been described as a disease since the late-nineteenth century. … The final part of the programme uses interviews and drama to describe the anti-homosexual reporting of AIDS by the media and other contemporary threats to the gay community. 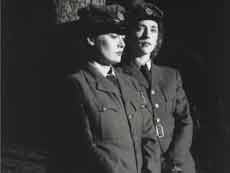 The Second World War is re-examined through the eyes of a group of gay servicemen and servicewomen, whose experiences range from ENSA-style entertainment to the River Kwai prison camp. Personal reminiscences, archive material and stage recreations of gay romances shot in the style of a 1940s back and white movie are combined in an humorous reclamation of a hitherto unrecorded history.

With an introduction by Conal McStravick (artist)

Saturday 4 June, 10:30-17:00pm | Stuart Marshall symposium with screenings: the TV essay, the public sphere and the visibility of AIDS in 1980s television

The symposium is free, but booking is required

In creative partnership with the LUX, this TV research symposium will offer a meditation on the TV video essay, with a particular focus on Stuart Marshall and his documentaries made for television broadcast on Channel Four. The event takes the opportunity to look at works that offer a critique of television and media practice, methods and the way TV represents sexuality and illness, queer histories and public activism. In identifying Marshall’s idea of a ‘committed television’ the symposium will explore issues of experimental TV, the public sphere and public service television, and the artist film on television.

Broadcast as part of the OUT series on Channel Four, 7 August 1991. 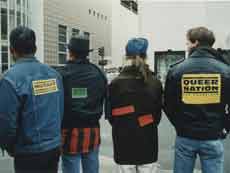 This film documents the origins of the AIDS activist movement in the US and the UK and the day community’s growing anger and frustration with the totally inadequate response of the US political and medical establishment to the epidemic. While the film celebrates the real successes of this movement, it also examines the problematic debates within it concerning democracy, representation, power differentials, and the relationship between homophobia, racism and sexism. Finally the film describes the birth of groups such as Queer Nation in the US and Outrage in the UK, which have spring out of a newly politicized sense of pride and community fuelled by the AIDS activist movement.

Followed by a presentation by Rebecca Dobbs (Maya Vision), with respondence from Daniel Monk (Reader in Law, Birkbeck) and chaired by Janet McCabe (Lecturer in Film and TV Studies, Birkbeck)

In 1991, Stuart Marshall compared working on a television commission to setting up his early sound and video installations, as, ‘a terrific tension – to know that one’s learning in this fantastically public medium’ (Queer Looks; 56). This session will compare continuities and discontinuities in Marshall’s early practice in sound, installation and video with that of his later television documentary and AIDS activism. It will look at how these forms configure audiences and publics and what place models of production, reproduction and distribution have in engaging forgotten vanguard futures, taking into account the differing ethical and political potentials of the distribution collection and the archive, more social forms (such as the reading group, the video workshop and the support group) or ephemeral forms (the script, the manifesto, the petition or the political protest). What role does contemporary art practice play in exploring the horizons of Marshall’s practice, past, present and future and given his commitment to a ‘signifying and oppositional’ practice, what is material for Marshall?

With an introduction by Charlotte Procter (Collection Manager, LUX) on materiality, preserving video and the Stuart Marshall collection. 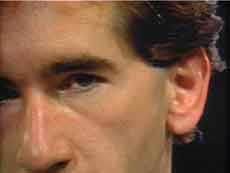 A narrator describes the beginning of a television programme. It sounds like a ‘made for TV’ movie. He then describes a series of seemingly disconnected scenes, which are illustrated by clichéd sounds effects. A memory test follows. A number of characters—writer, designer, make-up artist who are all played by the same actor—describe their part in the television production process. They seem to have trouble keeping their minds on the matter and their monologues slide away from a description (… the love of their craft to ideological statements about the representation of sexuality in Realist drama production).

The narrative of part one taken up and reworked. The gaps within and the limits of heterosexual representations of sexuality. The articulation of sexuality by the mode of the narration.

An illustrated news report of a rape. A simulation of ‘committed television’ which produces analysis rather than reportage. Text by Suzanne Brogger

What if the news were to be read differently? Would ‘committed television’ produce an analysis rather than a ‘reportage’? What kinds of images would it use?

Following our event is a presentation and intervention at the Studio Voltaire, between 18: 30-20: 00, which looks at the impact and legacy of Section 28, with members of the ‘We have rather been invaded’ group, facilitated by Ed Webb-Ingall. Booking required. Our event coincides with the release of the latest issue of Afterall, 41 (Spring/Summer 2016), edited by Helena Vilalta, who also writes the foreword

Aimar Arriola, Touching What Does Not Yet Exist: Stuart Marshall and the HIV/AIDS Archive